We are especially fortunate to be able to source fruit from this amazing vineyard in the Sonoma Coast.  Named Terra de Promissio – “Land of Promise” – by Diana and Charles Karren.

“With its proximity to San Pablo bay and it’s clay-loam soils the grapes from Terra de Promissio Vineyard produce wines of exception elegance and purity of place. Its everything we expect Pinot Noir to be. I enjoy working with the fruit because the wines produced from the vineyard have a distinctive character unlike any other on the Sonoma Coast.” – Andrew Berge

On January 14, 2014, the Sonoma County Winegrowers (SCW), announced that Sonoma County is committed to becoming the first 100% sustainable wine region in the world. Sonoma County’s wine industry has long been at the forefront of creating and utilizing sustainable practices in the vineyard, in the winery and in running their businesses. This expertise has now evolved into Sonoma County winegrowers and winemakers partnering together to establish the nation’s first 100% sustainable county which will benefit the environment while meeting the needs of consumers as well as increasing efficiencies, eliminating waste and saving money. Charles was part of the Sonoma County Winegrowers Board of Directors when this was initiative was created and unanimously voted on.

“Since Day 1 at Terra de Promissio, we have employed sustainable farming practices that consider the entire ecosystem-vines, insects, other plant species, soil life, soil type, and our surrounding ecosystems-in order to minimize pests and diseases and create a healthy symbiotic relationship between our vines and the land.”

“At the vineyard, we have created a sustainable system by planting different plant species in the vineyard rows or cover cropping. In addition to providing habitat for beneficial insects, cover cropping also minimizes erosion by eliminating the need for cultivation and increases soil health as the crops’ vegetal matter puts nutrients back into the soil.”

“In keeping with our commitment to of sustainable practices, Diana’s father Vadim has built by hand 4 raptor roosts and 10 owl boxes on our vineyard. They are all occupied and we have 24/7 help in controlling gophers and moles in an eco-friendly way.”

Sustainability is complex, but the results are simple – the land stays preserved in agriculture, people are trained, safe and treated with respect and the business endures.

“We at Terra de Promissio are proud to partner with the Sonoma County wine industry to become the world’s first 100% sustainable wine region.” 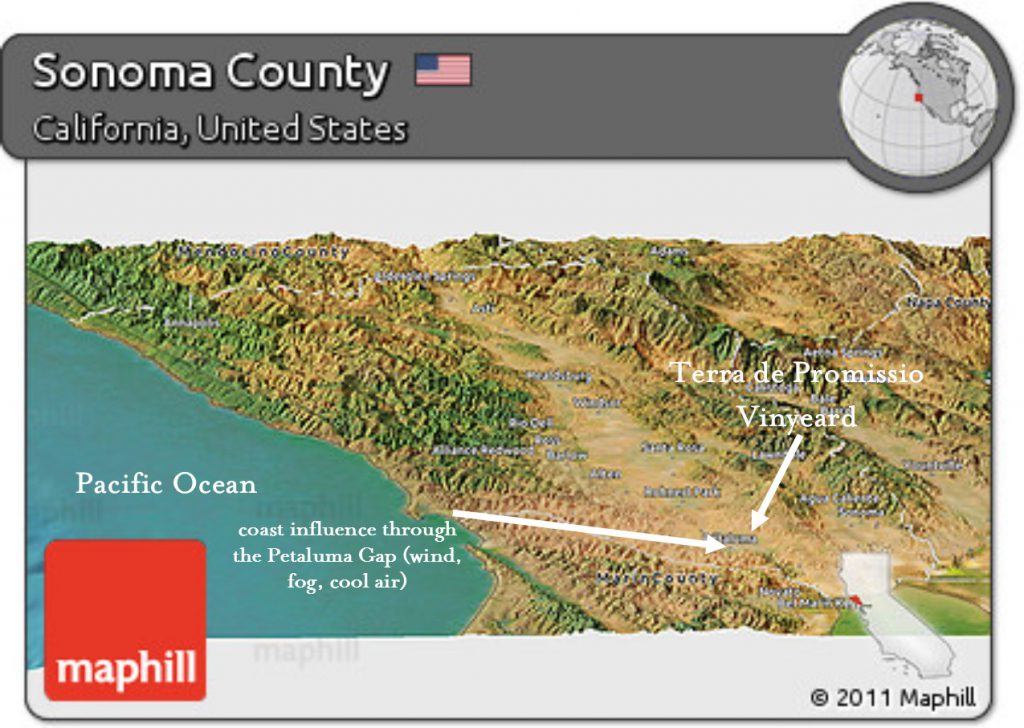 Terra de Promissio Vineyard is located in Petaluma – the “Petaluma Gap” located in the Sonoma Coast AVA (AVA = American Viticultural Area), “named after a coastal mountain opening that allows winds from the Pacific to breeze through the town of Petaluma and then roar south to San Pablo Bay. Wineries here are represented by the Petaluma Gap Winegrowers Alliance, which is working to get this area its own AVA designation.

Direct, daily influence from the Pacific Ocean defines the appellation. In the northern reach, vineyards are planted high on ridges just a few miles inland. Many lie above the fog that moves in to blanket lower elevations in the afternoon.

The heart of the AVA includes the Freestone area, a sheltered, pastoral valley where hillside vineyards bask in sun when it breaks through the fog. In the south, vines in adobe soils grow to the edge of salt mashes bordering San Pablo Bay.”

About the Karren Family and the story of the Vineyard

The ranch was a dairy farm that the Karren’s purchased in 2000. The vineyard was planted in 2002 and the first vintage was 2005. Spell has been purchasing grapes since 2010.

Charles and Diana Karren are both very passionate about growing grapes. It has been their dream to plant, manage and raise a family on the vineyard. Their story together began in 1998 when they met on the Caspian Sea. In 1999, Charles proposed to Diana at the Temple of Bacchus, the God of Wine, in Baalbek, Lebanon. She said, yes, and they celebrated at the famed Chateau Kefraya in the Bekaa Valley.

Upon returning to the United States, Charles and Diana began their search for what they called their Promised Land. They had looked at over 100 sites in Napa and Sonoma when they came across a beautiful 53-acre ranch, overlooking the town of Petaluma. The ranch was on two rolling hills, had the right soil profile and fresh water from a well. Most importantly, the hills faced southwest, which would get both the sun exposure and the wind and fog of the Petaluma Gap. All these characteristics are ideal for cool climate style Pinot Noir grapes.

Charles and Diana oversaw the planting 33,000 vines in 2002. During that summer, they brought Diana’s parents from Russia to help manage the vineyard. Terra de Promissio had its first harvest in 2005 and sold to 3 wineries. In 2012 and 2013, they planted an additional 18,000 vines to bring the total planted acreage of Terra de Promissio Vineyard to 50 acres.

In 2016, the vineyard had its 12th harvest and sold fruit to 13 wineries. Since day one, every row and block is custom farmed per each winemakers specific instructions.